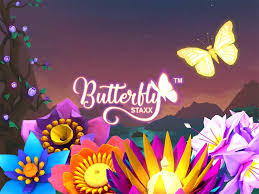 Butterflies is a fantasy-themed online slot game created by Vegas Technology. This slot contains 5 reels and 25 paylines in a standard slot game format that has been created with a fun theme centred on a magical world filled with flowers, sunshine and butterflies.

The main bonus feature of the Butterflies online slot is the Wild Butterfly feature, in which an animated butterfly flutters across the reels to turn other reel symbols wild. Scatter and wild symbols are featured in the game, the latter of which activates the Wild Butterfly feature. Additionally, Butterflies also offers a traditional Gamble feature which allows players to double or quadruple the value of their latest win.

Butterflies is set against a tranquil backdrop of lush green meadows dotted with colourful flowers and blue, purple and yellow butterflies. A blue sky streaked with white clouds attends the scene. The reels are surrounded by pink roses and the game’s glittering green logo, which adds an extra sense of fantasy to the game’s appearance.

On the reels are a number of theme-related symbols, including butterflies and caterpillars in a cartoon-like style. Each character on the reels is cheerful in appearance and also surrounded by glitter in keeping with this slot’s fantastical theme. Only the wild and scatter symbols in the game are animated, and the pink flower scatter will sway when involved in a winning combination. There is no game soundtrack, but standard game sounds have been incorporated.

On the reels of the Butterflies slot are symbols that relate to the butterfly theme, including a pair of red toadstools, a green caterpillar, male and female butterflies and their home. Also included are the standard playing card symbols 9, 10, J, Q, K and A in a bold and colourful font.

The male butterfly is also the game’s highest paying symbol, awarding a fixed jackpot of 7,000 coins when 5 of these symbols appear on an activated payline. The female butterfly awards the next highest payout of 3,000 coins for the same number of symbols.

The pink flower symbol serves as the Butterflies scatter symbol. The butterflies’ green home is the wild symbol, which appears only on the first reel during the game. When this symbol appears, the Wild Butterfly bonus feature will be triggered.

When the butterflies’ home symbol appears on reel 1, the symbol will stay in place and begin to glow on the reels. An animated butterfly will then emerge from the home and fly across the game’s reels, transforming random symbols into additional wild symbols. Once this has been completed, the symbols on the reels will be re-evaluated and any new winning combinations will be paid out.