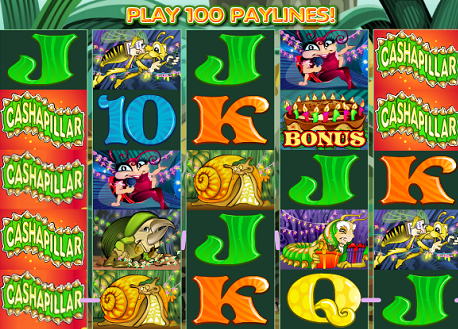 Some online and mobile slots have a rather serious theme; Cashapillar is not one of them. In this light hearted and well thought out slot we meet a 100 year old caterpillar who wishes to celebrate his birthday with his friends at a party. The slot game has 100 paylines to reflect the caterpillars age and plays out over five reels with five symbols on each. The coins range is very small, with only 0.01 and 0.02 being available as options. The maximum bet in the game is 20 coins per line with a minimum of 1 coin per line

Cashapillar is a game which will appeal to players of all budgets and experience levels. There are not very many special features, but the game has a very large standing jackpot and a low wager range. The low to medium volatility of the game ensures the wins happen often, but are not enormous which suits the low wager range.

The whole premise behind Cashapillar is that all the characters are at a 100th birthday party. The graphics and colours reflect this with lots of bright colours. All detail is in cartoon style, and very detailed. Cashapillar is a busy looking slot, with a backdrop of a green garden full of foliage. The reels are edged with brightly coloured line markers and take up most of the screen due to large amount of symbols. Player info is at the bottom of the screen in neat square buttons.

The symbols in Cashapillar include many of the party guests, and things one would find at a good party. The base symbols however are taken from a deck of cards. These are all in different colours with a patterned overlay, but otherwise have little to do with the theme. The theme base symbols take over from where the poker cards leave off, with a grasshopper, a rhino beetle, a snail and a lady bug. These are worth 200, 250, 300 and 400 coins respectively for five of a kind on an active payline. The highest paying symbol is the old caterpillar himself, which will pay out 1000 coins for five of him in a row.

The wild symbol is a green caterpillar looking pattern which says Cashapillar. These appear stacked on every reel and add a two times multiplier to any win that they form a part of. These Cashapillar logo wilds can also replace any symbol in the game except for the bonus cake symbols.